The Evolution of Triple Mowing

Back in the early 1980’s the vast majority of grass was cut using pedestrian (walk-behind) machines. 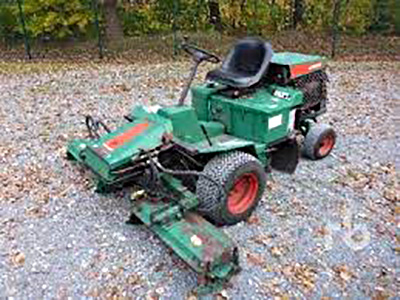 One of the machines for commercial use that was very popular at the time was the Hayter Condor Ratchet Drive, designed specifically for working on slopes. The Ransomes Reel-Cutter, a commercial 30 inch pedestrian cylinder mower, was also very popular with some Local Authorities.

In 1982 Ransomes introduced the first hydraulically driven ride-on cylinder mower - The Ransomes Motor 213. This machine was to be the start of a transformation in commercial mowing from walk-behind to ride-on, its introduction increased productivity and made the use of traditional pedestrian machines uneconomic, especially for large open areas around housing and roadside verges.

The Ransomes Motor 213 proved very popular with Local Authorities and prompted various other manufacturers to get involved such as Beaver (ultimately purchased by Hayter) who introduced a triple mower called the T20 and then the T224. 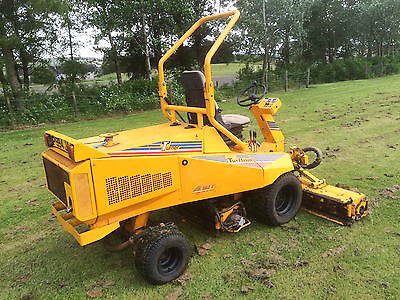 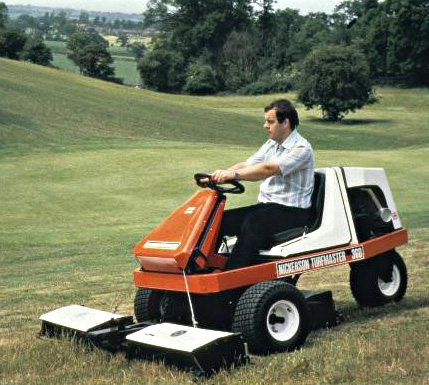 At the time there were a number of other manufacturers producing similar machines of this type such as Nickerson Turfmaster LTD, who won a design award for the Nickerson Turfmaster 360, as well as a machine made by Turner called the Turftrim which didn’t stay on the market for long.

The biggest player in the UK market was without doubt Ransomes, with the Motor 213 which then became the Highway and then onto the heavyweight unit known as the Parkway 2200 or was it 2250? 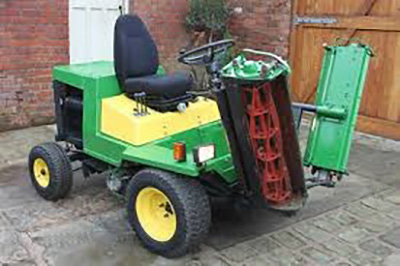 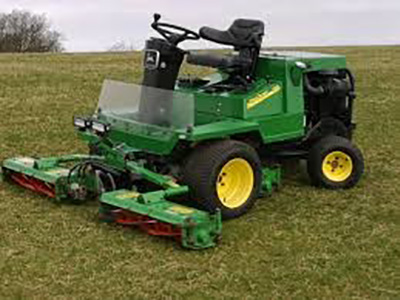 As time went on the competition increased with machines from Dutch manufacturer Roberine, who introduced a triple mower called the 900. This was especially popular with Schools and Colleges because of its compactness, as well as Swan Plant who were at the time the first National Groundscare hire Company.

Sales increased to a point that US Giant John Deere purchased the Roberine Company in 1991, having already acquired SABO in 1990 and re-named the brand Sabo Roberine and in 2003 started to market all the Sabo Roberine models in its famous green and yellow colours. 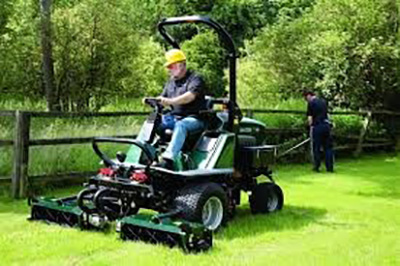 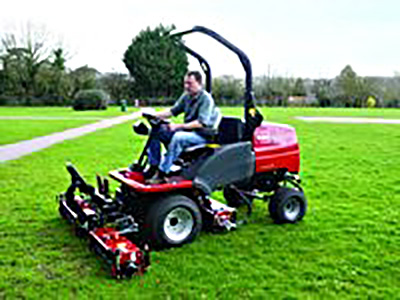 The next significant development in the ride-on triple mower market was the introduction by Hayter of the LT range in the late 1990s. This started with the LT312, a two wheel drive triple and was shortly followed by the very popular four wheel drive version the LT324.

Around the Millennium the LT324 started to take a greater share of the UK market away from Ransomes. It had been designed by Hayter to make maintenance easy and included innovative features such as a tipping front operator platform and new 10” cutter cylinders that were quick and easy to strip down for repair or maintenance.

Hayter was purchased by Toro, an American Company who at the time were largely known for golf course equipment. Shortly after its purchase, the popular LT324 began to be produced in Toro’s distinctive corporate Red colour. In 2010 Toro (Hayter) launched a new lighter, more compact range called the CT which included the CT2120 & CT2140. 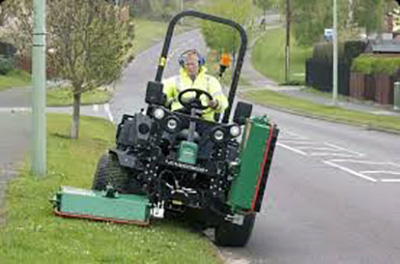 From the early nineteen eighties through the nineties and noughties, commercial triple mowers for Local Authority use were predominantly ride-on cylinder mowers, with few other cutting unit types available.

In 2012 Ransomes introduced the first ride-on triple Flail mower, the Ransomes Meteor which was based on a similar chassis of the latest Parkway triple cylinder mower, but with a bigger 42hp engine and more powerful hydraulics.

At the time this was the evolution the market had been waiting for. There was a lack of experienced operators in the industry, resulting in damage and misuse of the cylinder mowers which was sending running costs through the roof.

Budget cuts were also forcing councils to reduce the frequency of grass cutting cycles. Because of this machines were being asked to cut longer grass, causing cylinder mowers to struggle with the volume of grass being cut and resulting in a poor cutting performance and increased wear on the cylinders and bottom blades.

Unfortunately for Ransomes the Meteor experienced what was at the time thought to be ‘teething problems’ and despite many trials and testing of further prototypes in certain conditions, the machines just wouldn’t perform. 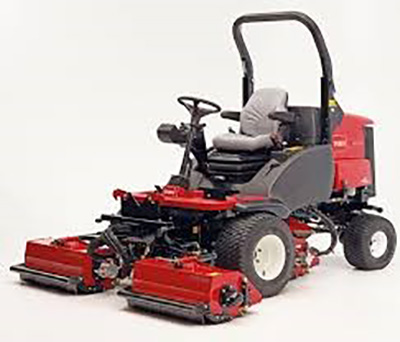 Whilst Ransomes attempted to address the issues with their new product, in the background, Toro were designing their own triple flail mower, The LTF3000. This was built on the newer LT3340 Triple chassis and was launched in 2016. Its successful introduction helped to ensure that ride-on triple cylinder mower sales fell off a cliff. The LTF3000 was able to provide a cylinder type finish, whilst coping with longer grass caused by the extended cutting cycles without the damage associated with cylinder machines.

Throughout the history of commercial mowing, many different types of machine have been used by Local Authorities and contractors to cut grass such as diesel ride-on mowers, compact tractors with mid-mounted mower decks and out-front rotary mowers from the likes of Kubota and John Deere. However the Toro LTF3000 started to become popular due to its flexibility.

One feature that always ensured the triple mowers success over other mower types has been the ability to lift individual units one at a time to avoid obstacles or double cutting of previously mown areas. With a professional operator this feature improved both manoeuvrability and the efficiency of grass cutting. 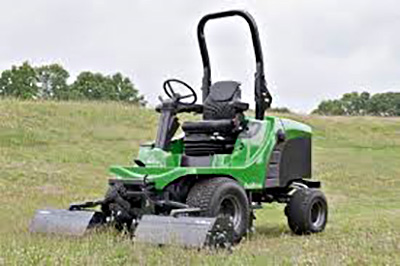 The Toro LTF3000 continues to be a popular choice for Local Authorities. However with many changes in the dealers representing the brand (as a result of Toro distributor Lely UK seeking to unify golf and commercial machines under one dealership) in some areas service levels slipped and the traditional close working relationship between customer and the factory was lost. This situation has helped to create new opportunities for a now independent Roberine, freed from the corporate shackles of John Deere following its sale to the Alamo Group in Spring 2019.

Alamo are a multi-billion dollar company you have probably never heard of, but are in fact owners of world-renowned brands such as McConnel, Bomford, Spearhead, Twose and Herder to name but a few. The Alamo approach is not to swallow up smaller businesses into a corporate machine, but rather to provide the local management with the investment and finance they need to grow and develop their individual business units. 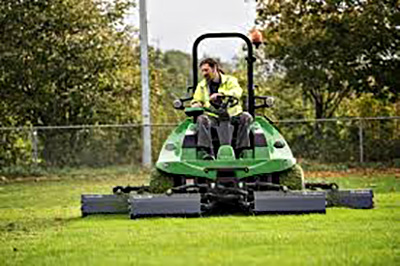 This independent approach and change of ownership, together with the introduction of its 21st century ride-on triple flail called the F3 and the five unit F5, has allowed Roberine to introduce innovative machinery via a new dealer network, some of whom were formerly large Toro dealers.

The first thing most people notice about the F3 when you operate it is how quite they are compared to other machines in the market. This coupled with an exceptional quality of cut, outstanding performance that is supported by dealers who have a proven track record for delivering service to the local authorities and the option of a high quality low noise safety cab makes these machines a very serious alternative to those offered by Toro and Ransomes.